@Jimmy approached me with the idea of a show-offy vinyl nerd posting shrine, but being a useless tart, he didn’t follow through, so I figure I may as well get the ball rolling with today’s long awaited arrival in the post: Midnight Odyssey’s Biolume II: The Golden Orb - 3 orange/red spattered LPs and a longie for good measure. Limited edition of 200 copies. 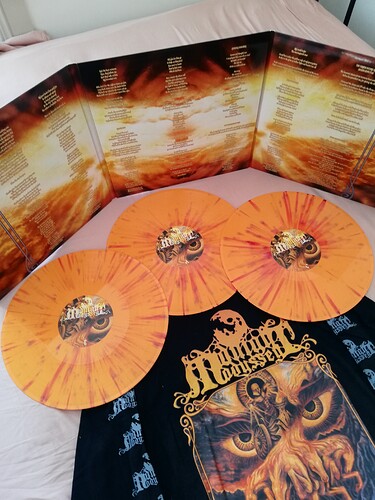 Thank you, though I am wary of turning this into a boxes and boxes part 2 thread. Gaze upon the splatter and swoon!

Oh I love the vinyl too, I just don’t collect it. But as a completely impractical metal obsession and money drain, I totally get it. Vintage longsleeves are not much different.

Speaking of impractical, introducing my three copies of Destroyer 666’s Unchain the Wolves:

Thought they were worth a bit more actually, and I guess they are if you look at the highest sold price or current asking price, but let’s keep it honest here, folxxx. 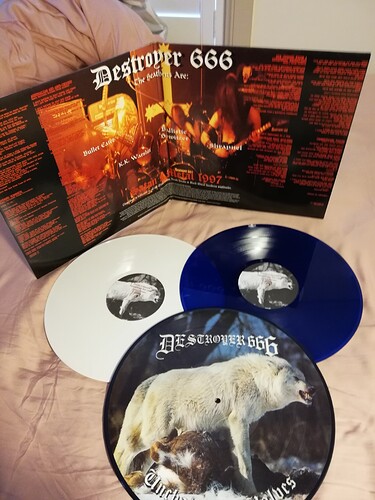 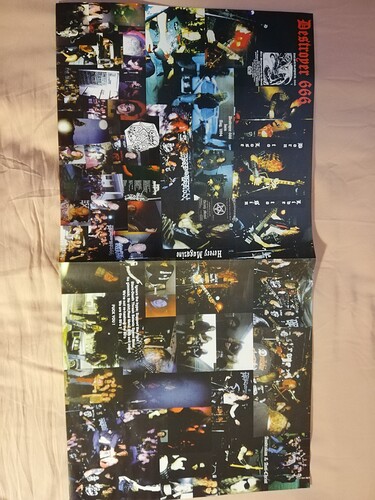 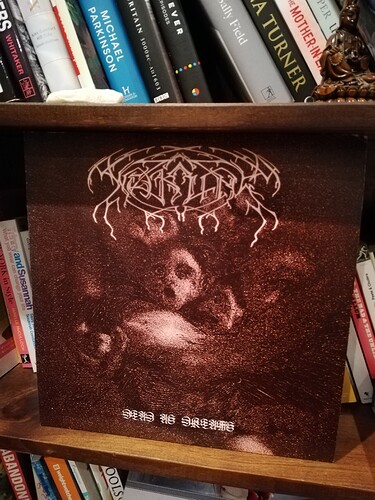 I can’t remember exactly how the opportunity to acquire Weakling - Dead as Dreams at its catalogue price arose - I think it was direct from Tumult but long after the vinyl had officially sold out. Probably just my charm again. 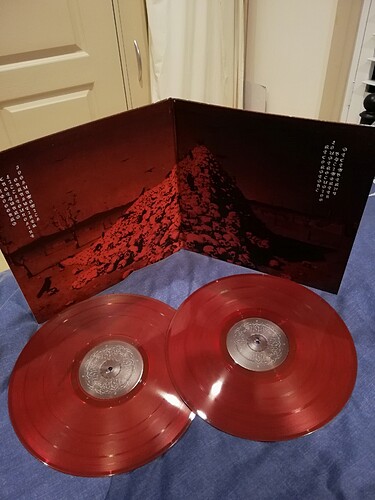 Anyway, I knew this would be my first investment property - album/band with a major cult following, ridiculous tales of a sequel that had been buried somewhere like pirate treasure, etc etc. 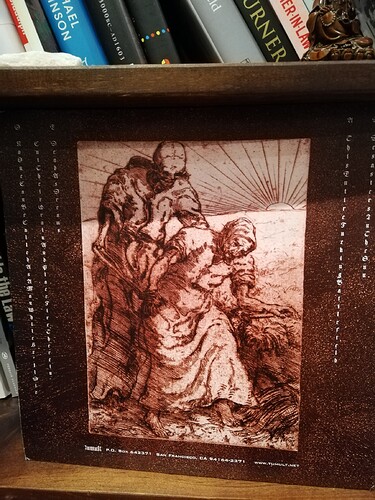 Despite all this, I shunned the nerdlike impulse to keep it in its original wrapping. I’ve played it dozens of times and shipped it internationally twice (might have gone OTT with the bubble wrap though). Median discogs price is 715AUD but it often goes for over a grand. Virgin cries for a repress have fallen on chad deaf ears.

Bit more D666 action. I thought I also had the 7" with the werewolf doing some slag on the cover, but I either lost it or misremembered it. 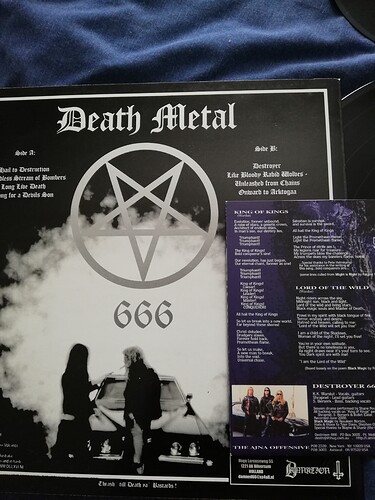 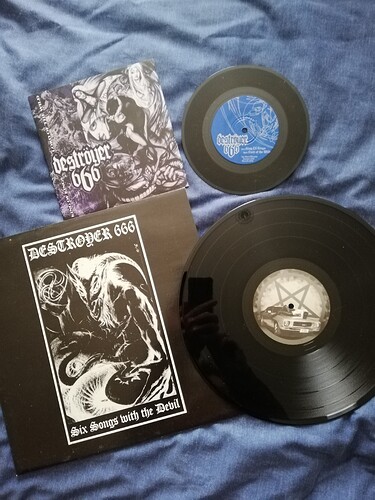 Both great records, hand-numbered and limited to 500 each. I think they’re worth about 100 bucks each. I like the recurring theme of old muscle cars, proper Aussie metal. I will take Badger’s appreciation for granted.

Failed, cynical attempts to cash in on the cult: these records were released at a time when Ildjarn and Mutiilation were revered and obscure, and their records as rare as hen’s teeth. But the Ildjarn is an interminable and utterly pointless exercise in ambient indulgence, and the Mutiilation is a hodgepodge of terrible demo and live recordings bundled up in a partyboi package that didn’t fit their erstwhile image. Mey’nach’s suicide hoax and the easy availability and accessibility of their later albums killed the kult dead. I think these may be worth fractionally more than I paid for them, and represent the last time I bought anything for rarity alone. 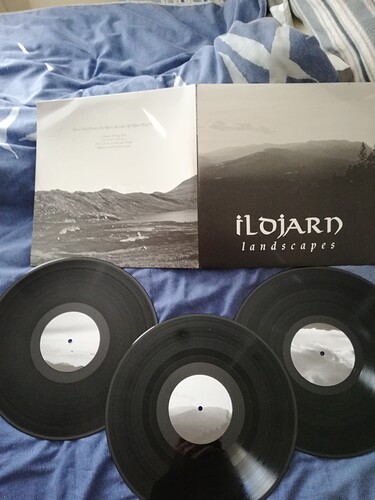 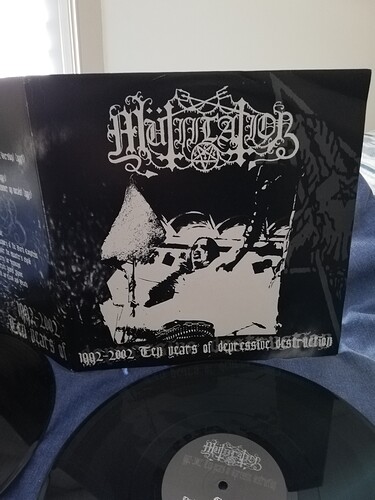 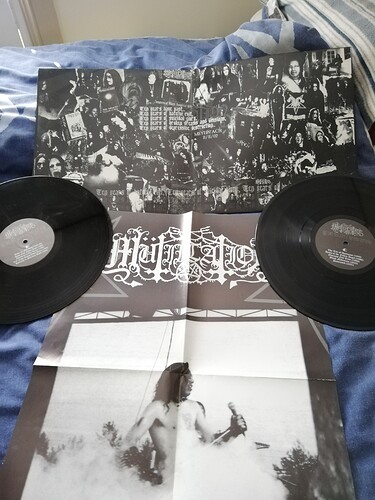 Also, I will be seeing Jimmy in like 10 days and will force him at knifepoint to help carry on this noble tradition.

Actually I was wrong on the Ildjarn value, its median sold price on discogs is 211AUD and highest is 400. I’d feel guilty selling it, though, it’s crap. His old BM material is great, though. I bought one of his rare CDs from John Chedsey for 30 bucks, it’s now worth 100.

Yeah, yeah, I know. But it’s such a fucking good album, and if Michael Jackson is the top-selling artist of all time when he actually paid parents to let him fuck their boys in a bizarro Itchy & Scratchy nightmare, then I can have this. In the mail… 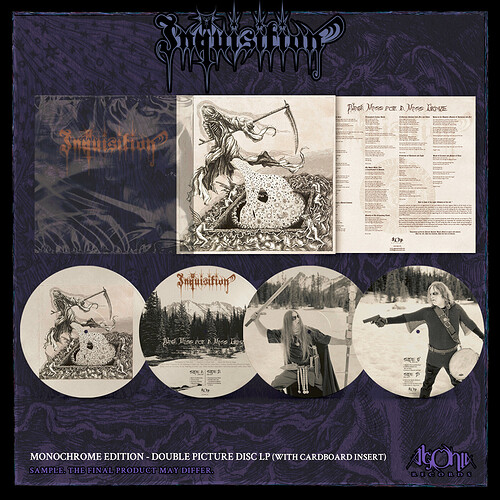 I posted the single here back in November. It’s fucking Inquisition. They’ve been one of the best and most unique acts in black metal for the last decade, at least since Ominous Doctrines. Every album is different. You can now post your Voice of Steel that I know you’ve been lying about. If not, I’ll have Jimmy post his.

You guys keep going on about Voice of Steel, but if I’m not mistaken, that was their first album after they eschewed further political statements. You really need to ask whether I own Weltanschauung, which is the one with that really problematic line about exterminating Jews that was quoted here or on last frm to great gasps, or Nechrist which is the one with a machine-gun swastika on the CD inlay and where the guy switches to English long enough to scream “white power!” during a hoedown. I do own the latter CD, having been enchanted by their earlier apolitical work and then being rather, shall we say, surprised and dismayed by the new direction.

What I’m saying is that I would gladly buy VoS if it had a sweet fuckin’ picture disc of a barn dance with swords and shit.

Whatever it takes to keep the thread busy.