Oh my goodness this is awesome:

Also, Old Morning’s Dawn, the entire album, is a masterpiece:

Let Mortal Heroes is still their best. Really good guitar sound and they managed to not fuck up the production quite as much as they usually do.

Yeah wasn’t thrilled with the last one. It sounded like they decided to release all the songs that got cut from OMD.

I’m listening to it now and the first track and the opening riff is almost identical to Old Morning’s Dawn (the track). It is a bit bland, but listenable.

I’ve been going through some of their back-catalogue for teh lulz. I am not an audiophile to speak of, but is amazing how bad everything sounds. Stronghold is easily the worst offender. I really liked Where Hope and Daylight Die back in the day but it is completely unlistenable. Just an absolute mess of a recording. Insane amounts of clipping. The parts where they introduce additional instruments are painful to listen to, there is no detail whatsoever and it clips like a motherfucker. It might have the worst reverb I have ever heard. The whole thing is physically painful to listen to.

Mortal Heroes is significantly better, but insanely overcompressed. The way the toms jump out and then get kind-of sucked back into the mix, for example. That kind of pumping is typically what you see with kick/bass combinations. No idea what the hell they were thinking there. Gets muddy when they ramp things up, but there is noticeably less distortion than Stronghold at least and the the guitar sound is pretty cool. Ashen Cold rules, though, despite its imperfections.

Oath Bound is not as bad as Stronghold… but it’s pretty fucking bad. Seriously, just listen to the clipping on Land of the Dead. They completely fucked up the chanting. And the guitar sound sucks. It’s almost as is they are a bunch of fuckin’ amateurs. I like the song, but I can’t listen to this shit.

Mortal Heroes is still my favourite, but Old Morning’s Dawn is actually pretty listenable. Volume is lower, stuff has space to breathe and you can actually hear the soundstaging on the track you posted. Easily their most transparent mix. 8/10 hobbits, would use as larping soundtrack again.

Look I’ll admit Summoning’s ambition is often greater than their ability, and a lot of it is sounds more aspirational than accomplished, but then I remember I’m listening to Austrian bedroom black metal made largely on a synth and I calm down and remember the robes of the five wizards.

I mean, sure. It’s just weird to go back to this stuff after so long. It is amazing how amateurish it is.

Apparently (according to their Wiki) the dude doesn’t even own a guitar and has borrowed one for each recording. I want to believe.

I have trouble getting into Lugburz and Minas Morgul, but the rest of their catalog is consistently great. Dol Guldur is a touch above the rest, one of my all time favorite.

I generally don’t give a fuck about the amateur production. If anything, I’m a little annoyed by the tinny sound on Doom and Old Morning.

I like Dol Guldur as well. I just remember being wowed by how big and boomy Stronghold was when I was 18. Oh, the ironing.

That they do not sound good is a secondary issue. The problem I have with recordings with lots of noticeable artifacts is that they are physically uncomfortable to listen to for extended periods. Those crackles, pops and pumps are fucking you up.

Summoning is just an extreme example of a common phenomenon. Megadeth did a remaster of Rust in Peace back in the mid-2000s and they completely butchered it.

Tl; Dr version: properly mixed music is physically easier to listen to. It doesn’t matter if it is Britney Spears or Behemoth.

That is almost exactly what happened. Apparently one of the guys got very ill and then the band nearly broke up. So they admit that their songwriting process was disturbed for the last album. I think it might be the only bad release they’ve put out. I mean, it’s not bad exactly, mostly lacklustre.

Minas Morgul rules. The dual vocals in particular on Passing. I prefer Dol Guldur for sure, though.

The transition from the opening track into Nightshade Forests is one of my favourite things in the world.

I’m too beautiful for this world.

Tl; Dr version: properly mixed music is physically easier to listen to. It doesn’t matter if it is Britney Spears or Behemoth.

I mean… “properly” mixed is very much a matter of taste though (quoth Cpt. Obvious). Britney and Behemoth give me a headache but I will happily listen to the groadiest of black metal for hours*. Hell, it’s my preferred background music when reading.
I do like me some seriously smooth stuff, like Steely Dan or Chic, I just think some things are better when they’re rough.

*as long as it’s not 100% treble with no bass whatsoever. I do have some standards.

Yeah, I have no problem with low-fi Darkthrone fuckery either. Those kinds of recordings are not typically lacking in dynamic range. The problems start when everything is squashed to maximize dbs and it just kind of spirals out of control from there.

I picked this EP up a couple of years ago and it’s one of my absolute favourites.

Michael knows nothing about raising with the battle orcs. 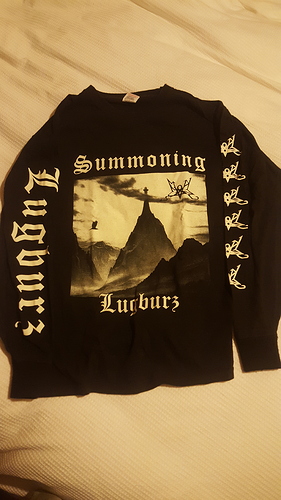 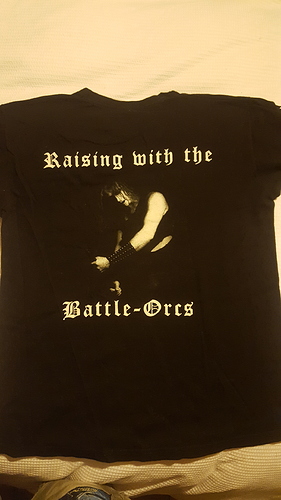 Rock Out With Your ‘Battle Orc’ Out.

Gorilla breaking out the Australian tuxedo.