Cigar and pipe-related matters here. Chewing tobacco and snus if you’re into that sort of thing.

I have a pipe and a few nice tobaccos from the fancy tobacconist in town. Havent smoked in ages though. I should go out and have a smoke one of these days. 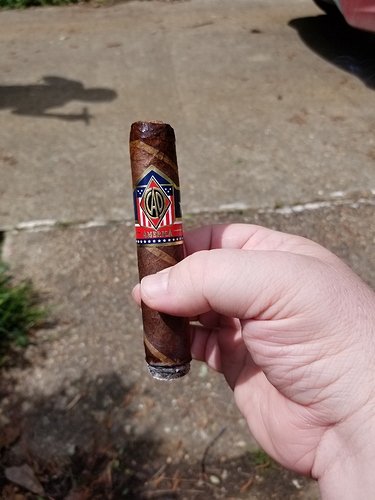 So when I saw that the rona was going to be an actual thing I decided to stock up on tobacco products because, the way I saw it, tobacconists would shut down fairly quickly and I had a 180 count main humidor and a 20 count travel tupperdor. So I just bought up whatever I liked, whatever I thought I liked and whatever looked good. I ended up with 200 cigars of wildly varying provenance and 36 ounces of pipe tobacco. The America was in that herd.

To be fair, I’ve never been impressed with CAO products and the America is no departure from that trend. I’ve never had a bad one, but I’ve never had a great one. They’re just cigars. I know fuckall about the company, but I imagine that they’re much like most other cigar makers. They make a product like most others and try to distinguish themselves with packaging and marketing.

About the marketing… my 8 year old saw the band on this on and said “It looks like Wonder Woman.”. And it does. So from this point forward, I’m calling it Wonder Woman.

Wonder Woman is an ok cigar. It’s billed as having a Connecticut shade grown and Maduro barber pole wrapper, but there is no real Maduro flavor. To be honest, it tastes for the most part like Drew Estate’s Factory Smokes Sun Grown budget cigar. In fact, it’s a dead ringer in the flavor department. Only towards the last third does it flash a taste of nutmeg. And I do mean the last third. As in the last puff before I said “meh” and chucked it into the tomato patch.

That being said, the particular cigar has the distinction of having been the single finest built cigar I have ever smoked. No shit. Look at this: 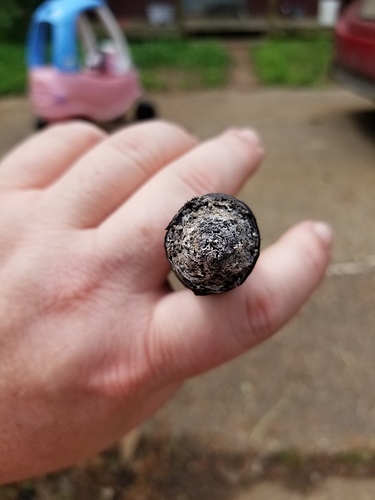 Right down the middle long filler perfection. Maybe it was a total fluke. Maybe it was the lone guy in the factory who could roll. But that is pure perfection. And the wrapper is beautiful. Personally, I give two shits about designer wrappers. No barber pole will ever compensate for a shit cigar, which is usually what they’re meant to do. But this thing was pretty, Wonder Woman’s underwear aside.

In all, I’d say it was pretty representative of every other CAO product I’ve had: Decent. Good, even. Just not quite the price of admission.

I have a pipe and a few nice tobaccos from the fancy tobacconist in town. Havent smoked in ages though. I should go out and have a smoke one of these days. 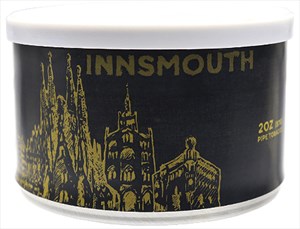 Blend: Virginia base with Black Cavendish, Katerini and Perique

Entertainment: Tales From The Loop

Every representative of C&D’s Lovecraft-themed line generally fits into the same basic slot: Virginia or Burley flakes with the barest hint of one Oriental condiment or another and maybe some perique chucked in there for variety. If pipe tobaccos were cars, these would be Honda Civics. Nothing surprising or disappointing, not boring or exciting. Just a solid performer of a tobacco good for mornings spent reading or an afternoon out fishing. It doesn’t bite and there isn’t any real spice to speak of. The perique pops up every few puffs, especially mid-bowl and after. As I was using a clay pipe, there was no real moisture, but I don’t think there would have been even with briar. The room note was nice, as well with plenty of wood and just a touch of the perique plum.

Would I recommend this tobacco? Sure. For new smokers it’s a good introduction to slightly more complex flavors than the standard crap churned out by the big pouch tobaccos and for seasoned smokers it’s a great every day driver. Coffee would smash this one flat, so I wouldn’t reccomend smoking a bowl with your morning cup, but it would go well with tea.

As light as this one is, I think new or old smokers would probably be best off using cob, clay or meerschaum. I’ve also had this in my Falcon and it did very well. If you do use a briar pipe with this, go with one that has a wide chamber so you can get the most flavor. 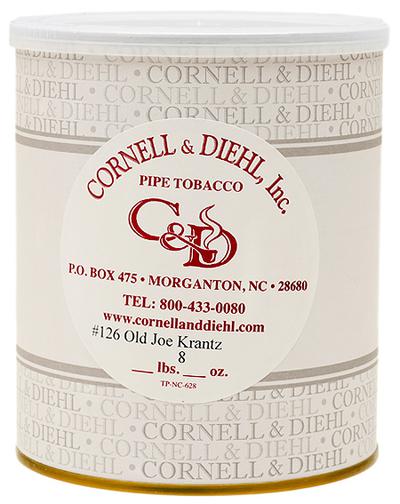 Old Joe Kranz was the grandfather of one of C&D’s chief blenders and this tobacco was created to replicate some of his usual blends. Namely, heavy on the Red Virginia with Burley in a supporting role and Perique solely used as an afterthought. And in my opinion, that’s where this tobacco both succeeds and falls short.

It succeeds in the sense that this tobacco probably very accurately captures what older English blends tasted like. Perique is actually a rare and expensive tobacco, with the world’s entire supply being grown on a few acres somewhere in south Louisiana. Its curing process is long and complicated and its price is very steep compared even to other condiment tobaccos. Pipes, being the traditional working man’s nicotine vehicle of choice for centuries, generally used very cheap tobaccos to achieve that price point. Thus, cheaper blends that used bulk tobaccos like Burley and Virginia with infinitesimal amounts of condiments like Perique and Latakia were the standard until recently, when pipe smoking became a niche pastime and everyone started smoking cigarettes. So if you want to know what pipe tobacco tasted like 50 years ago, this is it.

And this is also where Old Joe Kranz falls short. It’s sort of like driving a classic car. It looks awesome, is a great conversation piece and a nice look at how people got around decades ago. But then you realize that the seats are uncomfortable, the AC doesn’t work for shit and there is no GPS in sight. Everything sort of sucks even if it is classy. Modern tobacconists use the hell out of condiments, sometimes upping their percentages by an order of magnitude or more over what was common decades ago. Why? Well, because they can. Pipe smoking is relatively rare compared to where it was decades ago. The demand for these expensive substances dropped and therefore so have the prices. So modern pipe smokers have become accustomed to blends that either never would have existed or were hyper-expensive blends before the latter half of the 20th century. And we just don’t want to return to the dark old days of 99% Burley blends with a sprinkling of Latakia or shop floor sweepings for flavor. Throwback tobaccos like Old Joe Kranz are just that: Throwbacks to a simpler but not necessarily better era.

This isn’t a bad tobacco. This is what guys in the trenches of WWI smoked. It’s solid, simple and devoid of refinement. I could tell that there was Perique in there when I opened the tin, but the moment I touched fire to bowl, that was lost. There is absolutely zero Perique flavor present when you smoke this. And to be fair, I may have seriously screwed up in my pipe selection here. It was raining outside and I had time to enjoy a big bowl so I stuffed this in the biggest pipe I own: a J.M. Boswell Jumbo monstrosity with a chamber that measured one full inch by about three fathoms deep. So not only was I getting that old time basic bitch pipe flavor, but I was getting it delivered in 1915 steel foundry smokestack quantities. And it was pretty agonizing. The nicotine content was barely sublethal and it felt like I was puffing on a diesel tractor exhaust. I wasn’t just driving a classic car. I was piloting it down the side of the Grand Canyon with William Burroughs in the seat beside me blotted out of his gourd on Mexican black tar heroin shooting apples off my head. It was not pleasant. And not even coffee helped. It just brought out some sort of weird licorice notes that I actually looked forward to as a thin relief from the burning hay bale I was trying to smoke. Yeah. That pipe may have been a mistake.

Again, this isn’t a bad tobacco for what it’s trying to be: a retro take on the elder tobaccos of yore that people smoked before you could purchase a barrel of Perique for less than a king’s ransom. This is what your great grandfather smoked before he and the boys turned Dresden into an ashtray and came back to the base to go catch the clap. There was no bite at all and not even the gurgle you’re almost certain to get when using a larger pipe. Which considering the tobacco’s dryness, isn’t surprising. And on that basis, I would recommend it to anyone who is serious about smoking pipes. If for no other reason than to let us all know where we came from and how good things are now.