DB, what are the thoughts on Foster being given the big job?

I think he’s a pretty mediocre coach who tends to favour flaky, overly fancy rugby. There should be some good assistant coaches, but it’s a really big decline from the age of Henry, Smith, and Hansen.

There’s a rumour that Schmidt will join his team in June. I’m not confident in that though.

I wouldn’t have picked Robertson either. Gatland (might still end up as the AB coach in 2022), Rennie, Joseph/Brown, and Cotter were the head coaches I had enthusiasm for.

I don’t see Schmidt ever being an assistant again.

He wants, and needs, too much control for his game plan to work. That was even my reason for thinking he wouldn’t take the head coach role if it is was offered. He would never be given the kind of control of NZ rugby that he was given in Ireland. Added to that, it appears from some of the comments coming out about the last year in Irish rugby that when the pressure comes on he tries to control everything even more.

Leinster are playing some lovely stuff this year. Jordan Lamour is dancing past people for fun, and making them look like idiots. Still have some difficult teams we will have to beat, but without a loss so far in either competition.

42,000 in the crowd apparently, but it looks a bit empty. Probably a load at the bar when that photo was taken. 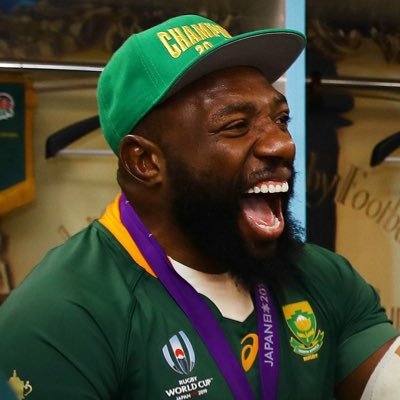 Okay, the Pro14 is a joke this year, much and all as it pains me to say it.

Leinster scored a point a minute for the first half tonight. Had a bonus point by 18 minutes. They have scored 50 points in over a third of their games this year, including Europe. It’s not good for anyone. Still, only undefeated team in all of Europe this year. 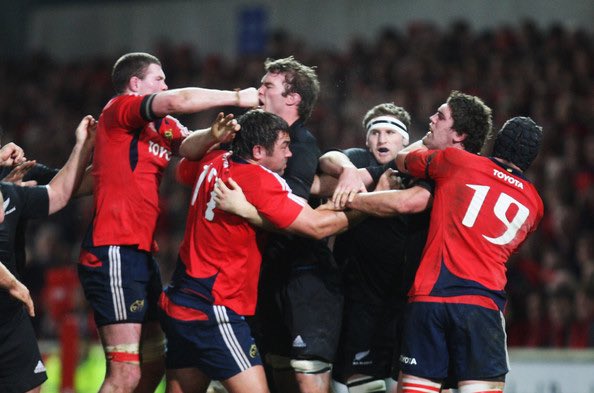 This was just throw-back posted on twitter. Look at baby Kieran Reid, and the shock on this face! 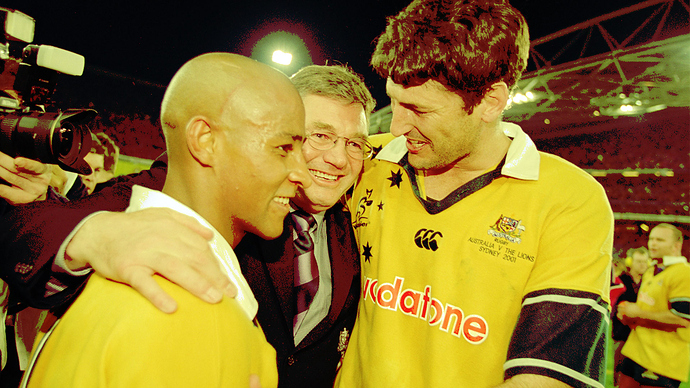 Return of the Brumby: the strategy all the top international teams will be...

Elements of the Japanese game plan, as well as the motions of particular players, are starting to follow a style of play that's over 20 years old.

Saracens are going to accept another 35 point deduction for being over the salary cap this year (the previous deduction was for the last 3 years), which will relegate them to the Championship. They won’t be allowed in the Champions Cup next year, even if they win this year’s edition. The squad will likely dispand, but I’m not sure all of them will fit in other clubs salary cap either.

Also worth noting that Nigel Wrey having stepped away is interesting… Seeing as technically all the money he pumped in was an accumulating loan.

So what has happened with Finn Russell?

Probably tried to run with the ball.

Not clear yet. I’ve heard everything from being out on the piss to calling out Townsend, in front of everyone, for planning to play shit rugby. Then was suspended for a game, and fucked off home himself (I heard that one twice or three times, so it’s the current leading rumour). 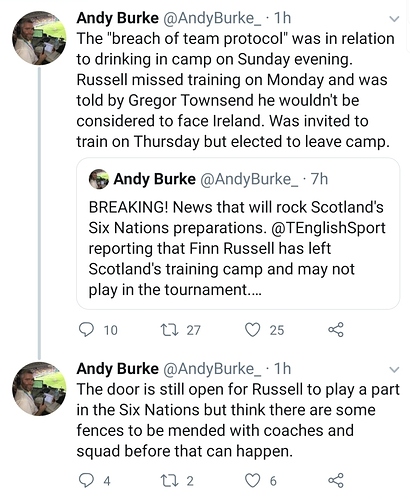 Yep, it appears he went straight on piss… and then went back to his Ma’s house to sleep it off.

Finn Russell was told he would not be selected to face Ireland in Scotland’s Six Nations opener after he failed to show up for Monday’s training session following a late-night drinking session, it is understood.

The 27-year-old has been disciplined for a breach of team protocol following an incident at the team hotel last Sunday.

Russell’s participation in the entire tournament is now in serious doubt after he turned down an offer to stay in camp and help Gregor Townsend’s men prepare for next Saturday’s Aviva Stadium clash.

The Racing 92 maverick flew back to Edinburgh from London on Sunday along with Saracens wing and national team colleague Sean Maitland after they had faced off in Heineken Champions Cup duty.

But once reporting to the Dark Blues’ team hotel, he headed straight to the bar.

When approached by team-mates and members of Townsend’s back-room staff, he ignored requests to stop drinking and later left the hotel to return to his parents’ home in Stirling.

Russell was a no-show at training the next day but did eventually report back to their Oriam base on the outskirts of the Scottish capital later on Monday evening. It was then he was informed he would not be selected for duty against the Irish.

During talks describe as “positive” by a Murrayfield source, Townsend did leave it open to the 49-cap stand-off to decide whether he wanted to stay in Edinburgh and help his team-mates get ready to face Andy Farrell’s Irish outfit.

But Russell has opted to return to Paris and will not be among the travelling party who fly out for a warm-weather camp in Spain this Sunday.

The Scots host England in their second Six Nations fixture on 8 February, looking to retain the Calcutta Cup for a third successive year, and the Scotland coach has not closed the door on the former Glasgow star returning for that showdown with the Auld Enemy.

But as things stand it remains to be seen if Townsend’s relationship with his talisman can be repaired.

The pair were famously embroiled in an angry half-time row at Twickenham last year as Russell protested against the tactics which had allowed England to race 31-0 ahead.

It was Russell who inspired the dramatic fightback which secured a thrilling 38-38 draw as he threw their original game plan out the window and went for broke.

Confirming the disciplinary action, the Scottish Rugby Union said in a tweet: “Stand-off Finn Russell will play no further part in preparations for Scotland’s Six Nations opener against Ireland, having been disciplined for a breach of team protocol during the week’s camp in Edinburgh. He has returned to his club.”

The news will come as a major blow to Scotland fans as they look for improvement following a disappointing World Cup campaign, which started with a 27-3 defeat by Ireland and ended in elimination before the knockout stages.

The in-form Adam Hastings is now almost certain to wear the number 10 jersey in Dublin but Townsend may look for reinforcements with no other regular stand-offs in his squad, although full-back Stuart Hogg played there earlier in his career and Northampton centre Rory Hutchinson can also play in the position.

Glasgow’s Pete Horne, who won his 46th cap in the Japan World Cup, was a notable omission from the original squad, while Duncan Weir is playing regularly for Worcester, having not represented his country since 2017.

They are continuing the silliest thing in World Rugby. The draw for the 2023 will happen after the 2020 November internationals. 3 years out from the tournament. Play badly in this Six Nations or November games, and potentially screw your 4 year cycle up. Wipes out this year as a time to develop your team. Have it 1 year before the tournament, you insanity people. 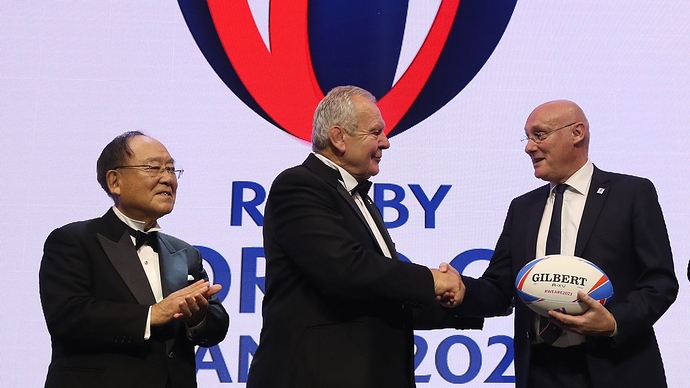 World Rugby and the France 2023 Organising Committee have confirmed that the Rugby World Cup 2023 Pool Draw will take place in Paris after the November 2020 international window. 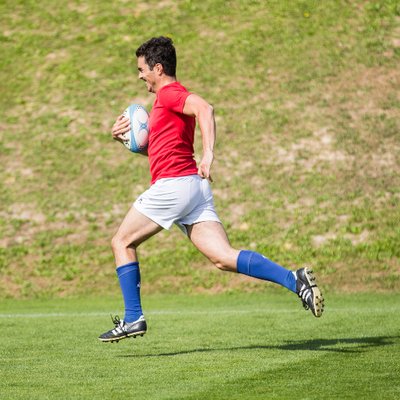 We’re getting stuffed by the French.

That was a huge case of penisfingers

Picking a better scrum half than Youngs or Heinz would solve half your problems in this game.

When this French team was announced I said “I can’t wait to see this team piss away a magnificently built half time lead.”

They had a good stab at it but failed. A mark of how poor we were. 10 mins of decent rugby by us at best.