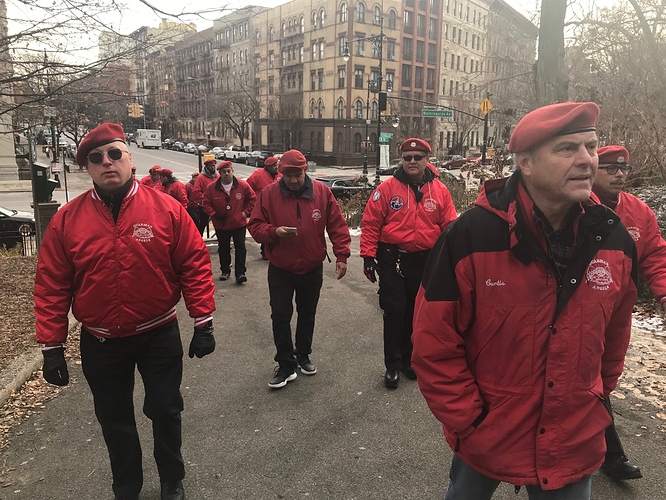 Curtis Sliwa, who founded the organization in 1979 in New York City, said the patrols would start at noon in the Crown Heights neighborhood and expand to Williamsburg and Borough Park later in the day.

The move came hours before five people were wounded in a stabbing attack during a Hanukkah party at a rabbi’s house in upstate New York late Saturday.

The latest incident followed eight attacks on Jews in Brooklyn since Dec. 13, according to the New York Police Department.

The violence included victims being struck in the face, head and back of the head and at least one suspect throwing a beverage at someone, police said.

“These attacks are taking place, and the cops have not been proactive at all,” Sliwa said Saturday. “It comes from City Hall and the mayor. He’s been just apathetic.”

The press office for Mayor Bill de Blasio responded in a statement Saturday, saying, “We have no tolerance for anti-Semitism in New York City.

“The best police department in the world has increased deployment in Crown Heights, Boro Park and Williamsburg, and has launched a new intelligence unit to prevent hate crimes from occurring,” it continued. "We will continue to work hand in hand with the community to keep our city safe.”

Prior to Saturday night’s stabbing, the latest attack occurred Friday when a woman allegedly slapped three females in Brooklyn and later told officers it was because they’re Jewish, police said at a news conference.

The suspect, Tiffany Harris, 30, was charged Saturday with attempted assault as a hate crime, according to court records. She was released without bail.

On Dec. 10, a couple opened fire at a kosher market in Jersey City, New Jersey, and exchanged gunfire with officers. It ended in the deaths the two, a police officer and three people who had been inside the JC Kosher Supermarket.

“This recent spate of hate-fueled crimes is even more disturbing as they occurred during the Hanukkah holiday, a time when Jewish New Yorkers gather to celebrate,” he said in a statement Friday.

Sliwa said local leaders of the Lubavitch Hasidic movement asked for his group’s help, and he believes Guardian Angels patrols will halt the violence.

“We’re a visual deterrence in our red berets and our red satin jackets,” he said. “Nobody’s going to commit an attack when we’re around.”

If they do, he said, “We’ll physically restrain the persons responsible, make a citizen’s arrest, and hold them until the police arrive.” 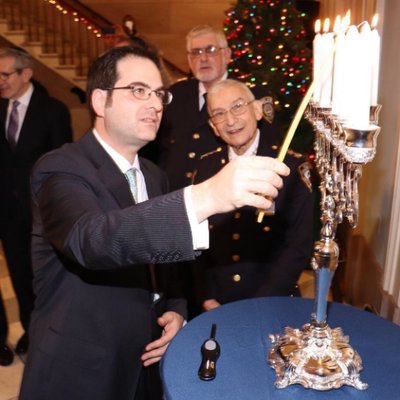 This morning @NYSenatorFelder, Assemblyman @SEichenstein, Councilman @ChaimDeutsch and I sent this letter to @NYGovCuomo. We're asking for the State Police and NY National Guard to be deployed to our neighborhoods, and for a special prosecutor to prosecute antisemitic violence. https://t.co/EVh8BjwpjT 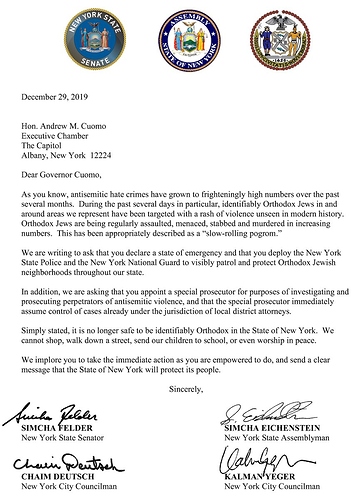 A string of anti-Semitic attacks, including a stabbing spree at a rabbi’s house, prompted four Jewish lawmakers to ask for the National Guard to patrol Orthodox Jewish neighborhoods in New York. In a letter to Gov. Andrew Cuomo, State Sen. Simcha Felder, Assemblyman Simcha Eichenstein, and New York City Councilmen Chaim Deutsch and Kalman Yeger said it is “no longer safe to be identifiably Orthodox” and urged a state of emergency be declared. “We are asking that you appoint a special prosecutor for purposes of investigating and prosecuting perpetrators of anti-Semitic violence, and that the special prosecutor immediately assume control of cases already under the jurisdiction of local district attorneys.”

I’m sure the outskirts of Denver know more about the issue than the Black Israelites.

No mention of the quasi organized crime impact these communities have on their neighbors.

I suspect Patrick is talking about the conflicts surrounding the school board elections in Eastern Ramapo, upstate New York and the issues that flow downstream from there including defunding and sale of public school campuses and (amongst other things) rampant building safety code violations in the communities that spring up in that region to accomodate a booming population. Right, Patrick?

That is a recent example, yes. Here, in the Outremont and Cote de Neige areas, a pretty common complaint is that as their communities expand, if you are an adjacent business or home owner, Godfather shit starts happening. Or the Hells Angels magically show up to carry out the acts to make sure you get the fuck out of the expanding boundaries.

Closed off mini societies operating under a different legal and court system than the rest of the city does not exactly breed open and sterile society.

Thanks for the info, goebbels. 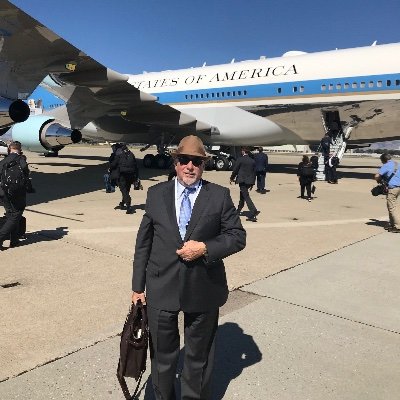 from a friend who was born in Manhattan and finally moved away 'The Liberals have ruined New York City. The smell of pot is everywhere. Half the people I meet in the street are stoned. Teenagers think it’s funny to blow smoke in the face of little school kids. homelessness '
Spyder January 2, 2020, 3:11pm #11

I was just in Manhattan for a few days and we both noticed walking through way more residual weed smell than before. We put it down to the fact that it was warmer outside than the last few times we’d been there in December.

My wife recently bought a shower anti-slip mat that smells of weed, even after I weed on it. I don’t know whether to be elated or concerned about the toxins still being released 30 showers later.

P. S. Ok I lied about the wee. But my son shat on it. The weed smell conquers all!

I think we can conclusively say the off-gassing cheap Chinese chemical mat has affected your cognitive posting abilities. 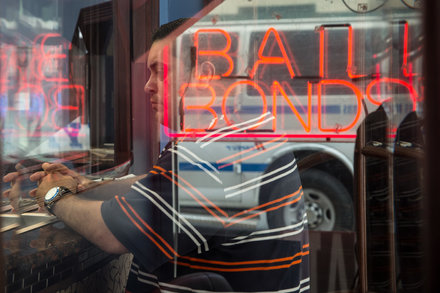 Why Abolishing Bail for Some Crimes Has Law Enforcement on Edge

Democrats are hailing the new law, saying New York’s old bail system punished the poor. Critics say it will put criminals back on the streets. 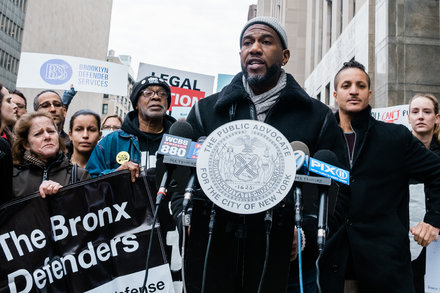 Gov. Andrew Cuomo, a Democrat, has signaled that the law may need to be modified, setting up a battle with his party’s progressive wing. 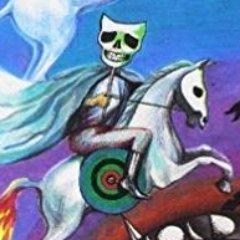 America’s premier cities may be uninhabitable for middle class families, but at least they’ll provide us a useful natural experiment in the limits of criminal justice reform https://t.co/FgIfFCQ1HU 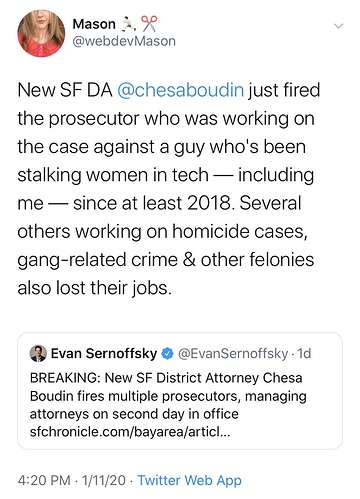 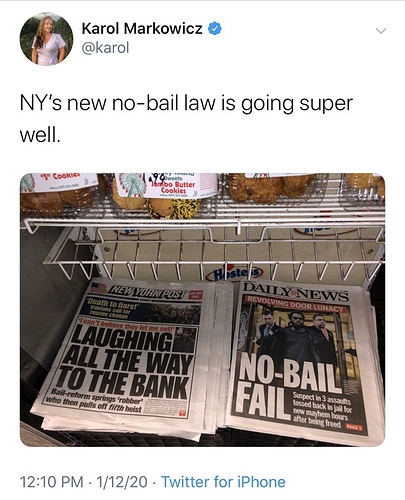 I bought my house in the city for 1/6 of the cost of a 1 bedroom condo in Harlem.

I voted for Chesa Boudin. Fuck the police, I’m on team crime, bitch

I’ve alerted the police that we have a criminal in our midst.