Inspired by Rik’s effort post in the other thread. I know everyone’s going to say Uncut Gems and Parasite, but fuck it:

2. Parasite
edit: I can’t find the old post I made about it, but I thought Bong managed to portray usual grievances about social inequality and depriving people of dignity and status better than in his other movies.

3. Saint Frances
Indiewood dramedy about a woman who gets an abortion then a job as a nanny looking after a lesbian couple’s IVF kids. Avoids being one for the carelords because all its characters behave like real people.

4. System Crasher
German movie about a young girl moving through the country’s childcare system. A bit tropey but the actor who plays the lead is great and there is a good mix of

5. Midnight Family
Good news, America - Mexico’s healthcare system is even more fucked up than yours. This is a doc about a family who run one of Mexico City’s private ambulances because the city had about nine state-owned ones. It’s basically Nightcrawler if it was real and about first-responders.

The United Kingdom of Great Britain and Northern Ireland everybody.

Yeah well we get all those shitty Marvel movies before anybody else but I don’t go on about it.

Marvel is so cool and so important I am so jealous

I still haven’t got around to watching Parasite.

This thread inspired me to check on my list of movies that I had seen previews for back in the earlier part of the year before everything shut down. Anyway, apparently Promising Young Woman is coming out in theaters on Friday, even though they’re all closed, but maybe a Blu-Ray release is imminent. Saint Maud still hasn’t been released in the US, but it did come out in the UK. So at least there might be some new movies to check out over this Christmas break. I had kind of given up on movies months ago!

Also, you forgot Sonic the Hedgehog on your list!

Best films I saw in theater this year:

you forgot Sonic the Hedgehog

I don’t watch movies that bow to fan service. I also don’t watch horror movies, but various people told me that Saint Maud was good.

Best film I saw in the theater this year was the 2019 Cornish movie Bait and it ruled.

Whoa, get a load of Mark Kermode over here.

I still haven’t got around to watching Parasite.

If you haven’t seen Shoplifters or Burning, see those as well. They’re every bit as good as Parasite and in the same vein.

Shoplifters is a very different film to me, it’s much more naturalistic. But beyond that, it’s on an entirely different level. Way better than Parasite.

Consider this - which one would work as well or even better as a book?
Parasite uses the whole toolbox of filmmaking to perfection, Shoplifters might as well be a play or a book. Obviously its story is more psychological and moving, but it’s only one ingredient of a great film.

I liked ‘burning’ best out of the three with ‘shoplifters’ close behind, since I am generally more interested in the character’s psychological portrayal than the technical perfection of the film itself, plot or social commentary. Parasite is amazingly crafted - to a degree that it often took me out of the moment in order to marvel at the technical beauty of shots and all the allusions crammed into them. So in some sense it can be argued that it is the better movie, but for me it made the impact less lasting since the characters serve the message/allegory more than they exist in their own right.

But beyond that, it’s on an entirely different level. Way better than Parasite.

Yeah, I originally wrote something to that effect, but I deleted it.

Some of my reservations about Parasite are tied to seeing the same handful of memes being passed around in my Facebook feed.

Parasite uses the whole toolbox of filmmaking to perfection,

This is true, but it also makes it feel full of artifice and movie-like. I enjoyed Parasite, but I know which style of film I prefer. 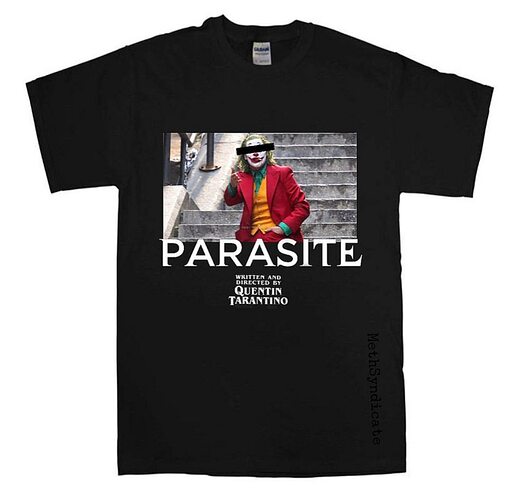